Each year, the History Council of Victoria presents a public lecture that shares fresh thinking and new evidence on an historical topic. This year, Dr Carolyn Holbrook will explore power and sentiment in the Australian Federation.

To complete the evening, we will announce the inaugural winner of the Jane Hansen Prize for History Advocacy.

This event will be presented online. 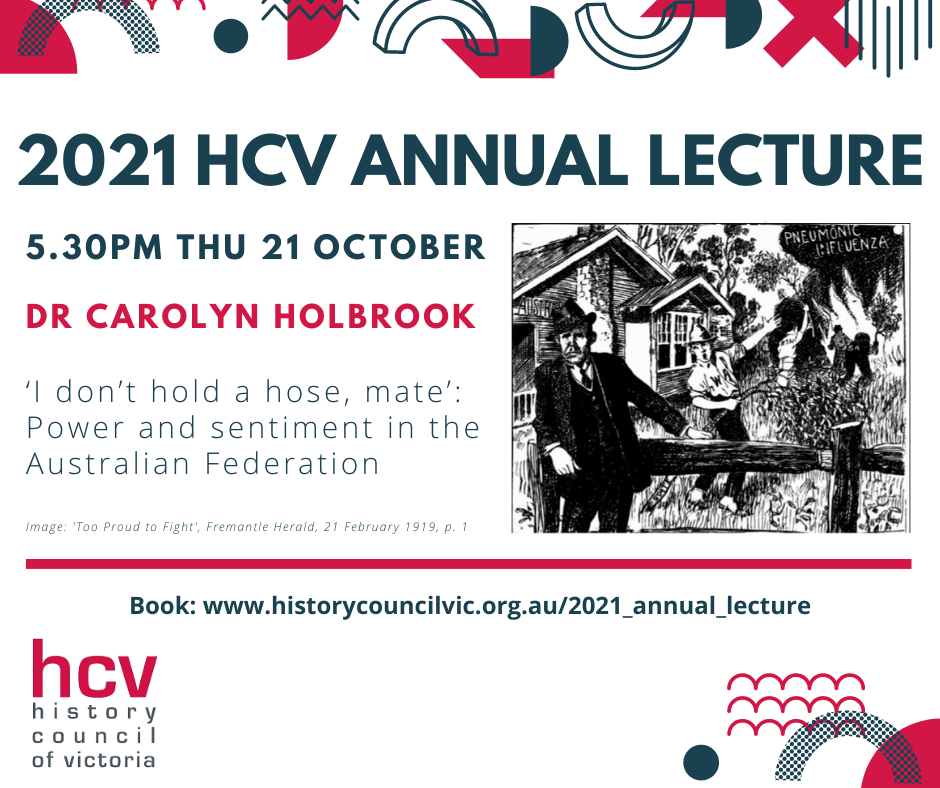 ‘I don’t hold a hose, mate’: Power and sentiment in the Australian Federation

If a good portion of Australians did not realise before the COVID-19 pandemic that they were living in a federation, they would be hard-pressed to maintain their ignorance now. While previous national crises have aggrandised the Commonwealth, this pandemic has elevated the states to a prominence they have not enjoyed since the earliest days of the Federation. ‘Gladys’, ‘Dan’ and ‘Annastacia’, in particular, have become national figures and the subjects, variously, of idolatry and derision. The COVID-sponsored resurgence of the states has revealed how little notice we typically take of our federal compact, and how ignorant we are of its history.

Western Australia’s Mark McGowan has enjoyed the most conspicuous political success. The premier-hero has charmed the West Australian public with a mix of humour and competence that even inspired a fan-girling comedian to write a country music song about her ‘knight in shinin’ armour[’s] … hard, hard, hard border’. Despite his success in managing the virus, McGowan’s historic election win in March 2021 can only be explained with reference to WA’s historical relationship to the rest of the Federation.

In this talk, I trace various episodes in federal history, including the Spanish influenza pandemic of 1919, WA’s secessionist bid in the 1930s and the 1951 Commonwealth Jubilee, to understand why Western Australia has often felt like ‘the Cinderella state of the Australian Federation’. I will also reflect on the structures of power and influence in public debate and the historical profession itself, which have worked to mute understanding of the Federation and its ingrained eastern states biases.

Carolyn Holbrook is an ARC DECRA Fellow in the Contemporary Histories Research Group at Deakin University. She is writing a cultural history of the Australian federation.