'According to the  International Labour Organisation (ILO) more than 40 million people worldwide are victims of modern slavery. Although modern slavery is not defined in law, it is used as an umbrella term covering practices such as forced labour, debt bondage, forced marriage, and human trafficking. Essentially, it refers to situations of exploitation that a person cannot refuse or leave because of threats, violence, coercion, deception, and/or abuse of power.' United Nations

Backed by a unanimously adopted resolution at the United Nations General Assembly, 2021 is also the International Year for the Elimination of Child Labour.

In addition, the International Day for the Abolition of Slavery, 2 December, marks the date of the adoption, by the General Assembly, of the United Nations Convention for the Suppression of the Traffic in Persons and of the Exploitation of the Prostitution of Others (resolution 317(IV) of 2 December 1949). 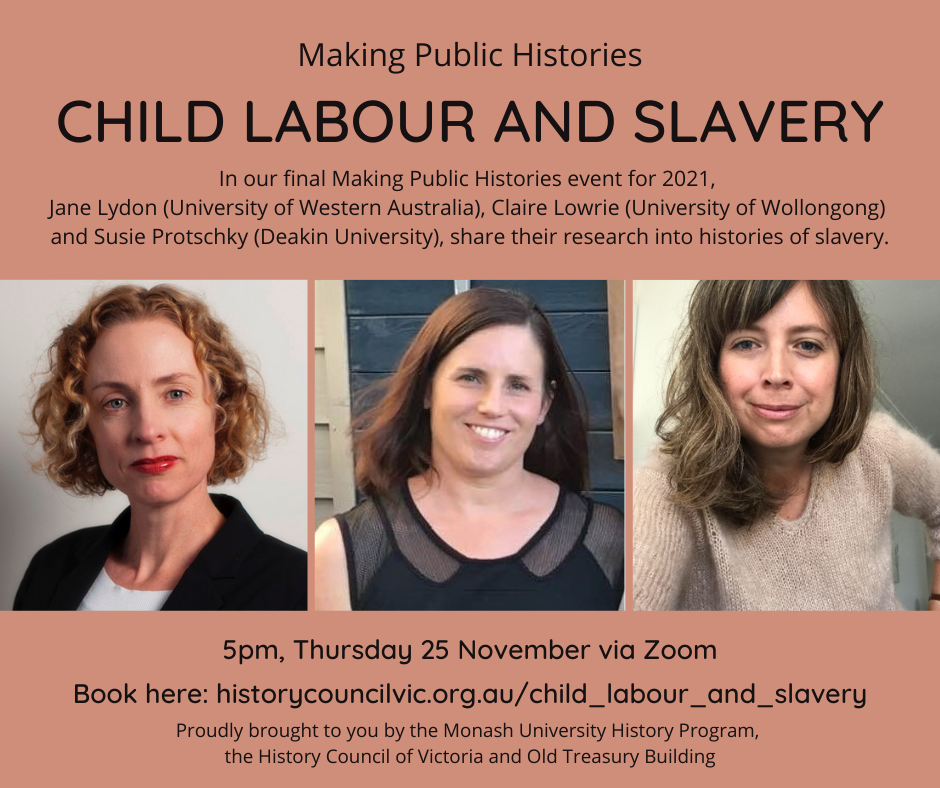 Aboriginal labour was highly sought after in Western Australia’s north-western pastoralist and pearling industries. During the 1880s, the frontier regime of the Murchison-Gascoyne region entailed the forcible and perpetual ‘assignment’ of Aboriginal people to settlers, their arrest for ‘absconding’ or ‘theft’ of stock, their removal ‘on the chain’ to prison, and the appropriation of Aboriginal women and girls by white settlers for sex. This looked very much like Caribbean slavery to some observers, who exposed a culture of secrecy that condoned coerced labour and especially the sexual exploitation of Aboriginal women and children. The legacies of this complicity are visible today in continuing sexual violence against Aboriginal women.

Claire Lowrie, 'The International Campaign to End the Mui Tsai Practice in British Colonies during the 1920s-1930s'

This talk explores the international campaign that emerged during the 1920s and 1930s to end the mui tsai practice in British colonies. I explore the complex politics that shaped British responses to the mui tsai question and consider how this colonial case study might shed light on contemporary campaigns to end child labour. Mui tsai were Chinese girls that had been sold into servitude by their impoverished families. In the British colonies of Malaya and Hong Kong, thousands of mui tsai lived and laboured in Chinese homes. Concerned by accounts of the abuse of mui tsai, the International Labour Organization and the League of Nations called on British colonial authorities to bring an end to the practice. However, the British were reluctant to do so.

The Indonesian National Revolution (1945-9) ended three and a half centuries of Dutch colonialism in Indonesia, but not before the Netherlands launched the largest military engagement in its history to attempt a reconquest of its colony. Dutch soldiers’ amateur photographs made during the  conflict reveal, in ways that textual sources do not, the recurring figure of ‘Henkie’, a Dutch name given to Indonesian boys whose work as domestic servants around the barracks sometimes crossed over into child soldiering. These photographs record the histories and legacies of colonial child labour regimes and decades of military violence under Dutch rule in Indonesia, and they also raise questions about history and memory in narratives of Indonesian independence.

Jane Lydon's research centres upon Australia’s colonial past and its legacies in the present. She is interested in the ways that popular and especially visual culture has shaped ideas and debates about race, identity and culture that persist today. In particular, she is concerned with the history of Australia’s engagement with anti-slavery, humanitarianism, and ultimately human rights. Her books include Eye Contact: Photographing Indigenous Australians (Duke, 2005), the edited Visualising Human Rights (Perth, 2018), Photography, Humanitarianism, Empire (Bloomsbury, 2016), and Imperial Emotions: The Politics of Empathy Across the British Empire (Cambridge University Press, 2019). Her latest book Antislavery and Australia: No Slavery in a Free Land? (Routledge, 2021) examines the entwined histories of the abolition of British slavery and settler colonisation.

Claire Lowrie is a Senior Lecturer in History at the University of Wollongong. Her research focuses on the history of domestic service in Australia and Southeast Asia. She is a Chief Investigator on two current Australian Research Council Discovery Projects that explore those themes. Claire is the author of Masters and Servants: Cultures of Empire in the Tropics (Manchester University Press, 2016) and Colonialism and Male Domestic Service across the Asia Pacific (Bloomsbury, 2019), co-authored with Julia Martinez, Frances Steel and Victoria Haskins.

Susie Protschky is Associate Professor of History and an Australian Research Council Future Fellow (2021–5) at Deakin University (Melbourne). Her most recent book, Photographic Subjects: Monarchy and Visual Culture in Colonial Indonesia (Manchester University Press 2019), won the Asian Studies Association of Australia and the Royal Studies Journal book prizes in 2020. Her research on photographs taken during the Indonesian National Revolution (1945­–9) has been published in the books Visualising Human Rights (2018) and Gender, Violence and Power in Indonesia: Across Time and Space (2020), and the Journal of the Humanities and Social Sciences of Southeast Asia/ Bijdragen tot de Taal-, Land- en Volkenkunde (2020).