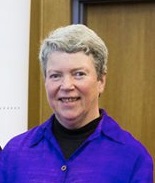 Dr Judith Smart AM FRHSV is a member of the Executive committee of the History Council of Victoria (HCV) and has represented the Royal Historical Society of Victoria (RHSV) on the HCV Board since 2009. She served as Deputy Chair of the HCV from 2010 to 2019.

Judith is Honorary Associate Professor at RMIT University and has published on Australian women’s organisations and political protest, and on the Australian home front during World War I. She is a member of the RHSV's Heritage and Publications Committees. She represented the HCV on Women’s Heritage Centre Victoria (WHCV) and subsequently served on the board of Her Place Women’s Museum when WHCV amalgamated with Her Place for the purpose of establishing a permanent women’s museum and archive in Victoria.

On Australia Day 2020 she was awarded an AM for 'significant service to education, to social research, and to women'.

Photograph courtesy of the National Library of Australia.