Each year, the History Council of Victoria presents a public lecture that shares fresh thinking and new evidence on an historical topic. This year, Associate Professor Catherine Kovesi will present on Beauty in Response to Plague: the city of Venice. 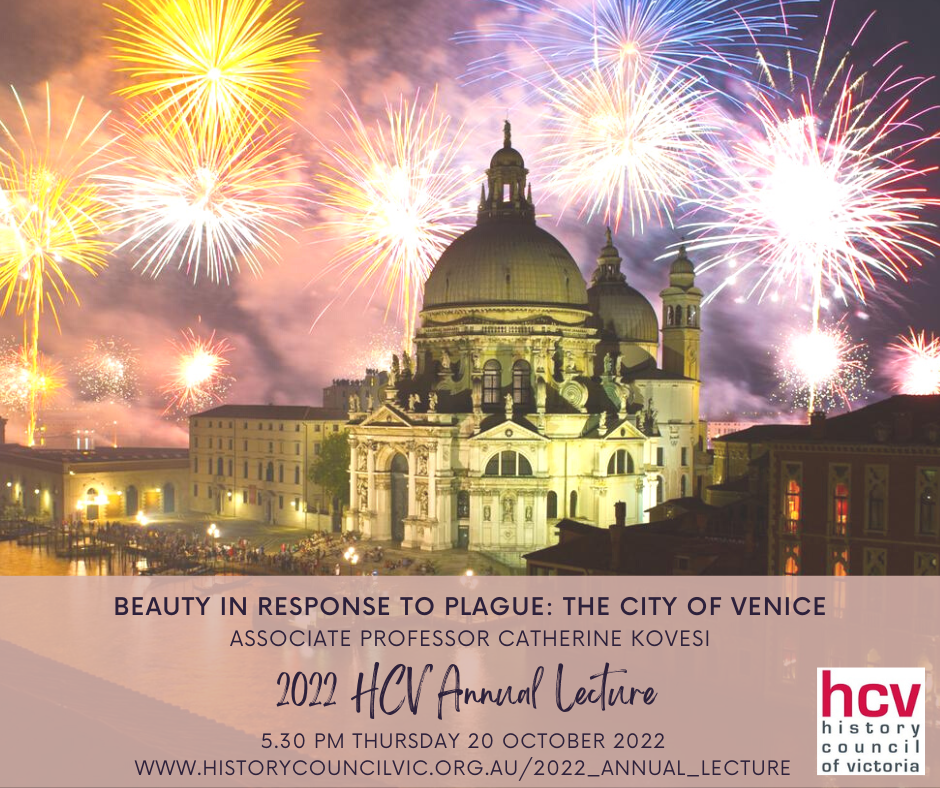 This is a free event and will be presented online.

In October 1347 there was an outbreak of a highly contagious disease in the south of Italy that originated in the East and soon spread like wildfire through the rest of Europe. In its first 18 months, the so-called Black Death killed an estimated 25 million people in Europe alone and resurfaced repeatedly for the next three centuries until its last outbreak in Marseilles in 1720. It was port cities above all that faced the greatest ongoing threat from plague and which were by default at the frontline of pandemic control, all instituting a range of measures both during and after successive outbreaks.

One port city, that of Venice, was remarkable not only for the innovative role it played in instituting a comprehensive plague defensive strategy, but for the staggering beauty of its responses to the possible threat, present danger, and aftermath of each outbreak of plague. The entire city and the wider lagoon area is marked by these responses – in art, architecture, and ritual commemorations – which have left an indelible imprint upon the city scape which is so familiar to the world’s imaginings of Venice

This lecture will outline Venice’s comprehensive systems for pandemic control before concentrating on the breathtaking model it provides for a response of beauty even in the face of unbearable trauma and death.

Catherine Kovesi is Head of the Discipline of History at the University of Melbourne and Chair of the Australasian Centre for Italian Studies. She has published widely on the debates surrounding luxury consumption in early modern Italy to the present, on Florentine and Venetian social history, and the history of women religious in Australia. She is on the Editorial Board of Brepols Late Medieval and Early Modern Studies series, and is co-General Editor of Bloomsbury’s forthcoming six-volume Cultural History of Luxury. She takes students from Melbourne to the city of Venice and curates bespoke cultural events in the city.