The Friends of the HCV spent a frosty but sunny Saturday visiting some fascinating historical collections and museums in the Central Goldfields of Victoria, Australia. Several of the destinations (in Maryborough and Maldon) are important heritage buildings. We extend grateful thanks on behalf of the HCV Friends to the staff and volunteers at each of the organisations we visited - they shared their knowledge of local history and heritage very generously.

Here we share some photographs taken on the day.

The Gallery is a member of the Public Galleries Association of Victoria. The exhibition that we saw features an amazing selection of wedding photos taken by a local man, Wal Richards. Over five decades, 1946-1996, Wal documented almost every wedding in the Maryborough district. He rode his bicycle to each wedding, often cycling up to 20 km to reach churches in locations outside Maryborough. His collection of over 20,000 photographs is now owned by the Maryborough Midlands Historical Society. There's a short video about his work on the Culture Victoria website.

The Society manages and interprets Worsley Cottage, a bluestone and brick home dating from 1894. Arthur Worsley, the original owner, was a stonemason and built it for his bride, Agnes, and later his family. He and the family owned it until sometime in the 1940s.

The cottage now houses displays of artefacts and photographs that represent the history of many local families and businesses. On the same block of land is a machinery display shed and a delightful cottage garden. There is also a slab hut, originally constructed c. 1844 by the Joyce brothers on their property Plaistow, then relocated to the care of the Society in 1978 and restored (with a wooden shingle roof, calico ceiling and rammed earth floor) for public access.

The Society also has a modern purpose-built Resource Centre (1996) that houses some additional displays plus the photograph and documentary collections. The Society is accredited as a museum under Victoria's Museums Accreditation Program.

The group enjoyed lunch in the cafe in this impressive historic building.

Max Berry, writing in the Future Rail Newspost (August 2017), notes that, in 1890, 'the no-confidence vote forcing [Victorian Premier] Gillies from office occurred a few days before a ceremony at the station and foundation stone laying acknowledging Gillies’ role. The story has it that the same stone was used with the inscription facing inwards – Gillies was no longer Premier. But the Victorian Railways conducted a renovation in the 1980s and no evidence was found to support this story – they couldn’t find the stone. The most recent renovation was done in 2007 and a new foundation stone refutes the story as a myth.' ('A Station with Town Attached', page 11.)

This Museum is housed in a substantial building that was constructed as Maldon's market building, then converted into the Shire Hall and offices. Some very significant items are on display, including the Maldon Miners' Banner (recently registered by the Heritage Council of Victoria) and the Maldon Panorama photograph that's the subject of a fascinating article in the latest edition of the Victorian Historical Journal (vol.89, no.1, pp. 165-178). David Oldfield and Peter Cuffley, co-authors of the VHJ article, kindly explained to us their research and showed us other parts of the collection and the resources managed by the Maldon Museum and Archives Association.

This museum is only a recent creation: it opened in 2006. It has, however, already gained considerable support and recognition for its achievements in the preservation of historic machinery and archival records (including the Thompson’s engineering archive). Project Officer Alan Miller shared with us his knowledge, enthusiasm and commitment. 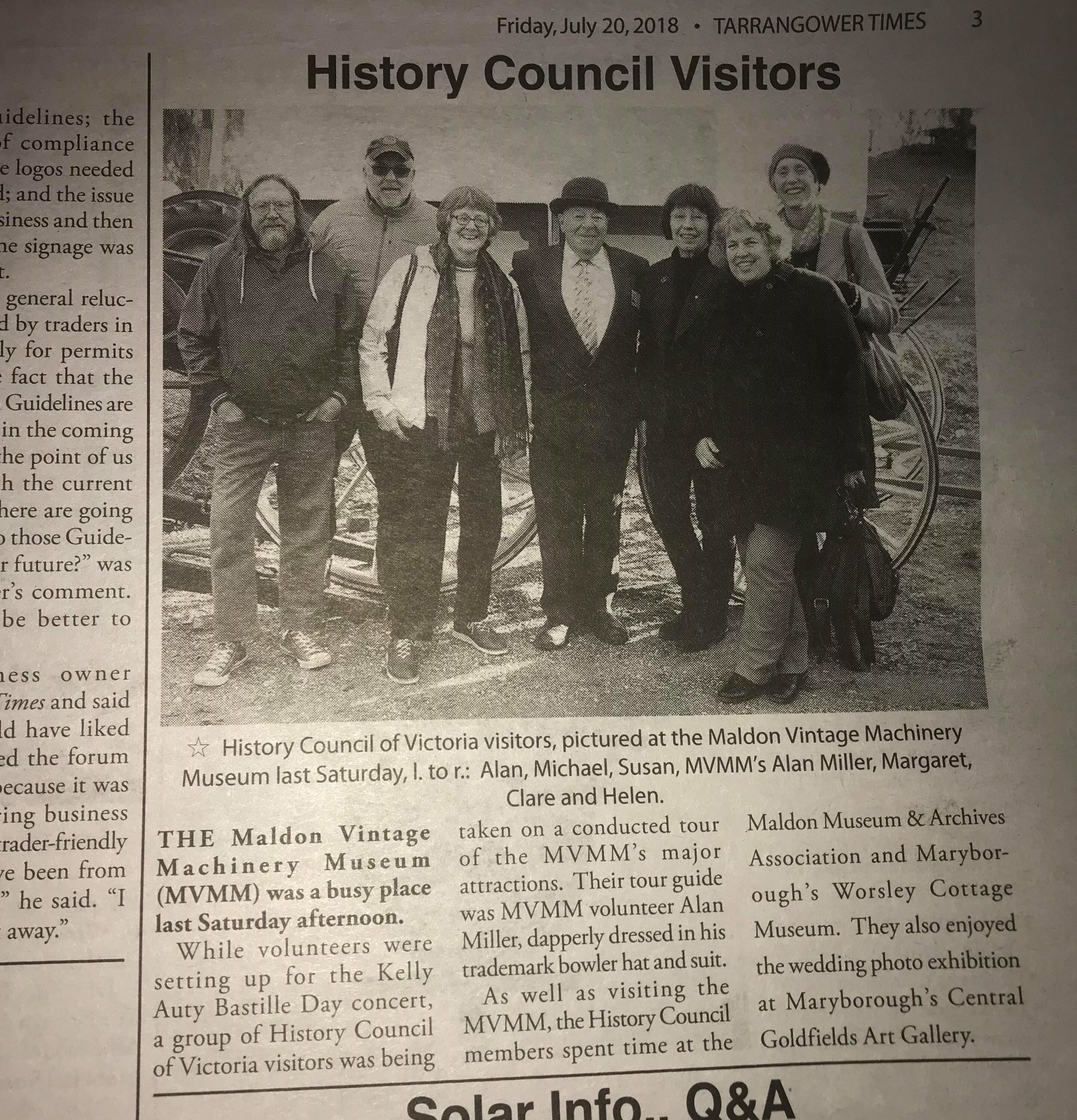