Teasing women’s stories from the archives

Our first Making Public Histories event of the year was Teasing Women's Stories from the Archives on Thursday March 04, 2021 from 5pm - 6:30pm

You can view the recording here: https://youtu.be/SlmIKSmj-pE

In March we celebrate Women’s History Month, part of the context for annual celebrations of International Women’s Day on 8 March. In this seminar, three historians share their experience of researching women’s lives, as biographical dictionaries strive to increase their representation of women. From a medieval countess to Victoria’s female criminals, the stories uncovered range widely in both time and place, pointing to the richness the archives can yield 'with a little more effort and research'.

The presenters and their topics were:

' "They just need a little more effort and research to track down": addressing the gender imbalance in the Australian Dictionary of Biography'

The Australian Dictionary of Biography was, from its inception, intended to include representative as well as significant Australians, but nevertheless women remained in the shadows with only 10 women to 565 men in volume one and 11 women to 596 men in volume two.  The proportion has gradually increased to nearly one quarter of those who died between 1991 and 2001, but the challenge to redress the balance has now been taken up and the number of ‘recovered lives’ is testament to the effort and research of recent years. Plans are in hand to incorporate them into a revised Australian Dictionary of Biography.

'Looking for Elizabeth: locating medieval women in the archives'

In response to shifting community expectations, major biographical dictionaries are moving to include more women among their entries. How can medieval women be located in the archives of institutions from which they were largely excluded in their own time, and in which later archivists were often uninterested in noticing and listing them where their lives were recorded? This presentation reflects on my experience of researching the biography of one of the daughters of Edward I.

'Freeing female prisoners from the archives: understanding “criminality” in context'

In his 1937 memoir about his career as a police detective in Melbourne, Alfred Stephen Burvett made a seemingly oxymoronic remark when he stated 'It must be remembered that it is not always criminals who commit offences or crimes'. Historically not every individual who entered the prison system fitted popular conceptions of the ‘criminal’; this seems especially true of women prisoners. Using archival prison records, this paper will discuss the offending careers of 6,042 women incarcerated in Victoria between 1860 and 1920 in order to reveal the complexities behind the 'criminal' identity imposed upon such women.

Dr Carolyn Rasmussen’s work as a public historian since 1985 has ranged over the history of Victorian public institutions, the labour movement, science and technology, education, biography and the role of women in all of them.  She is currently an honorary fellow in the University of Melbourne and chair of the Victorian Working Party of the Australian Dictionary of Biography.  Her most recent publication is The Blackburns; Private Lives, Public Ambition.

Dr Kathleen Neal is Lecturer in History at Monash University. She is a specialist in medieval political culture, and a frequent contributor to RN's This Week in History on medieval topics. Her book on letters and political rhetoric in the reign of Edward I of England is forthcoming with Boydell Press.

Dr Alana Piper is a Postdoctoral Research Fellow at the Australian Centre for Public history at UTS. Her current project, Criminal Characters (2018-2022), uses digital history to trace the lives and criminal careers of Australian offenders from the 1850s to 1940s. From 2014 to 2018 Alana was a Research Fellow at Griffith University on The Prosecution Project. Alana’s research interests draw together the social and cultural history of crime with gender history, legal history and the digital humanities. With Ana Stevenson, she produced the edited collection Gender Violence in Australia: Historical Perspectives (Monash University Publishing, 2019). 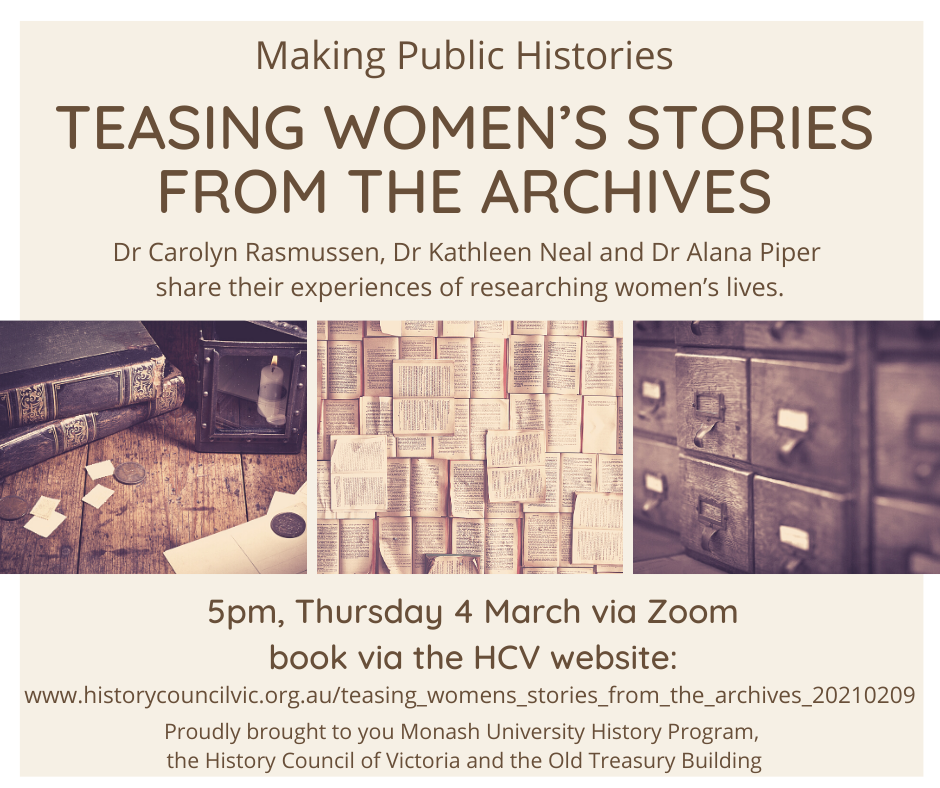